You know what they say about Ohio. It’s high in the middle and wide on both ends.

I have family in the Dayton area so I’m familiar with just how wide. Plus, a couple of our UBTs have covered nearly every professional team in Ohio. (I’ve only missed the Mahoning Valley Scrappers and possibly a new team that’s sprung up since our Ohio tours.)

Although none of this week’s driving has dragged, I brought along a laptop in order to share something with Mitch. Of course it’s baseball-related.

I’d been fanatical about baseball since Little League. Even considering our brief season, pickup games, whiffle ball, The Sporting News and the Game of the Week, I craved more. So I finally responded to the APBA ad (in The Sporting News) to receive a free Johnny Bench card. What better way to spend some birthday cash?

I still have that set and every season since. I’m still active in a fun face-to-face Master Game league called OOTL with about a dozen other local baseball enthusiasts.

I boot my laptop and arrange my starting lineup. Soon we hear Ernie paint the diamond picture with the Riegle Speakers hosting. Ohio’s girth never seemed so narrow!

Before we know it, we cross into West Virginia for a familiar grocery store stop. (If you’re unfamiliar with Pennsylvania’s laws regarding beer sales, think Dark Ages.)

Over the PA border lies Washington County. When traveling I-70, you can literally glance directly into the ball yard home of the Washington Wild Things.

Our hotel also hugs the Interstate as we’re perhaps 150 yards from the home plate entrance. This is where UBT 2013 will conclude.

Due to Washington’s proximity to Pittsburgh, two friends in Mitch’s face-to-face All Star Baseball winter league join us on the hotel patio for pre-game pizza and beverages. Chris joined us for UBT 2010 featuring both Chicago MLB teams and Milwaukee with bookend games in South Bend and Gary, Indiana. That had been our most aggressive trip prior to this marathon. We’re glad he and Jeff can share in our final night of UBT 2013.

The four of us stroll toward the entrance of Consul Energy Park. Our perfect evening of independent Frontier League ball is enhanced by the “Turnpike Classic.” The Lake Erie Crushers represent the Cleveland Browns while the home team assumes the role of the Steelers. 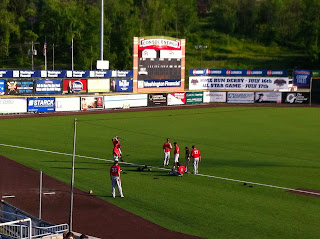 The outdoor stadium features artificial turf and dirt. Although bouncers do kick up some sort of cloud.

Bleacher seating is flanked by a picnic area down the left field line and a party deck in far right. The kids really enjoy the mascot as many families attend.

Steeler-themed giveaways highlight between-inning moments. The Crushers live up to their name during those innings, scoring early and often, coasting to a 9-1 victory. 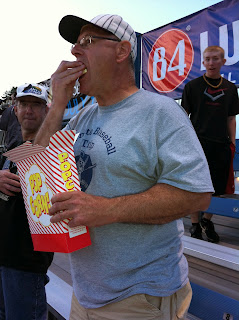 The Wild Things load the sacks in the bottom of the 9th, but come up empty. No one homers, but Russell Moldenhauer strokes an RBI triple in the 4th.

We enjoy post-game beverages and baseball highlights back at the hotel before Chris and Jeff travel back to Pittsburgh. All that remains for Mitch and me is a good night’s rest and a leisurely Sunday drive to Harrisburg.

UBT 2013 gives us a lot to talk (and write) about. Our custom T-shirts, binders, photos and conversations keep these UBT memories alive. Thank you for taking this journey with us.