Just want to say a few thank you’s, but first a big congrats to Ed for getting his name on the trophy! Great season and great job for The Plague!!!!

Brandon – thanks for putting time and effort into things like this message and this league.
Craig – thanks for hanging in there the last few seasons. You are a big part of keeping this thing together and I appreciate your passion.
Brian – thanks for all your hard work on the website and the pitching grades.
Tim – thanks for wanting to come back. One of the questions Tim asked me is if the big traveling trophy was still around. Hey, John: take a look at it. Tim’s name is on there.

I just wanted to add one more thing. At the end of the day we play this game for our own various reasons. For me this is just one of my many interests in life but it’s also one that I no longer wanna go without. And it comes down to the relationships I have with each of you. So even though I don’t always like decisions, rules, or even outcomes of my own games, I will always strive to try to do what’s right by the league.

Again, if anyone has any questions or further suggestions, just send them.

I’m ready to start going over pitchers while I anxiously await the delivery of my cards!!!

A good craftsman never blames his tools, but after more woeful Browns offense in the 2nd period I just placed a big order with dicegamedepot.com. The Browns slashed .188/.258/.321 in the 2nd making the numbers from the first (.218/.268/.367) look like they’re from the steroid era. Despite trading Kershaw and Strasburg the pitching staff held steady, even slightly lowering their ERA by a hundredth from 3.28 to 3.27.

… and somehow despite all of this epic sucking the Sharts managed to go 13-14 in the second and sit just 3 games below .500. We’re hoping the addition of Jose Abreu and Adam Jones will help.

Two 1st Period sweeps make the difference as the Speakers finish 8 over .500. To continue in the playoff hunt, the Speakers will need to improve on their two series in which they went a flat 1-3.

Although (lack of) offense is still our Achilles, those stretches seem to be less frequent this season. Management is quite pleased with our .235 team average (2nd in the league) and .395 Slg%.

We’ve stung 40 homers while surrendering 30. It’s been a long time since the Speakers averaged over 4 runs per game, but that’s where we currently sit. Opponents have scored 3.16, but many of those were timely.

The Speakers went a crushing 5-8 in one-run games, including 3 consecutive one-run losses (2 to The Plague and 1 to the surging Browns). However, shutouts (long a cold-dice bane for this team) have tilted in the Speakers’ favor so far, 5-4. (Harvey should have one in Game 3 and Severino in Game 16. I’ve updated our stats since hastily sharing them before vacation.)

Offense: Buster Posey leads the way with 38 hits (15 more taken away) while leading the regulars with a respectable .281 average and .345 OB%. Manny Machado knocked in 23, but Anthony Rizzo and Yoenis Cespedes earned 22 RBIs (all in the current top 10).

Cespedes has also found gaps with 13 doubles (tied for first in OOTL). Surprisingly, Rizzo has legged out 3 triples while sharing the lead in long balls with Machado (7 each). Rizzo leads the league in runs scored (28).

Rizzo also wins the patience in the box award with 20 walks. Cespedes has trudged back to the dugout 45 times already after striking out.

Mookie Betts has swiped 4 bases while Kolten has taken off at all the Wong times (1 in 4 attempts). We expect our 62% SBA to improve.

Machado has grounded into 6 of the team’s 24 DPs. We still have too many 24s in our lineup, but this should go hand-in-hand with SBs, since we were conservative on the base paths.

As expected, Rizzo was plunked 5 times to lead the squad. Wong leaned into one 3 times.

The Speakers lost 8 HRs, but were gifted 3. Opponents lost 13 with no gifts. Prevented walks were nearly even as the Speakers lost 19 to opponents’ 20. We lost 129 singles to 116 that we prevented.

Defense: 25 errors seems like a lot when we’re normally running 45 points onto the diamond. However, average defenders Roughned Odor and Kike Hernandez each have 3 while pitchers account for 5. OF3 Cespedes and Chris Young each have a pair of miscues.

Posey has gunned 31% of potential base stealers (18-8) while Stephen Vogt nailed Christian Yelich, the only attempt against him in limited duty.

Pitching: This will definitely black cat him, but Carlos Martinez is 5-0 while coughing up a hit per inning with a robust 4.30 ERA. Meanwhile, Chris Archer (3-1) has surrendered 55 hits and prevented 24 more. Archer also started 9 times and has finished 3 to lead the team with 67 IP.

Harvey has watched 11 pitches disappear, yet has only given up 18 total ER. He and David Price enjoy ERAs just under 3.00. Price has prevented 5 HRs while Harvey has turned back 9 potential walks.

Although the starter and pen ERAs are similar, the pen seems to leak at just the wrong times. Jeurys Familia (0-3, 4 S) has allowed a hit per inning, as have Brett Cecil, Roberto Osuna and Trevor Rosenthal.

The pen has lost nearly half of our games (3-6) with 9 saves while starters are an impressive 19-8. Leading the league in ERA was a pre-season goal that we’ve achieved through the 1st period.

Overall, we’re pleased with our current standing and look forward to starting the 2nd period soon. 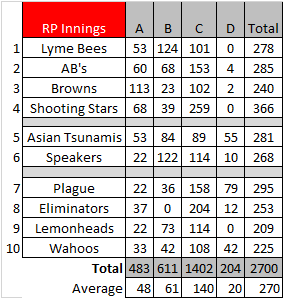